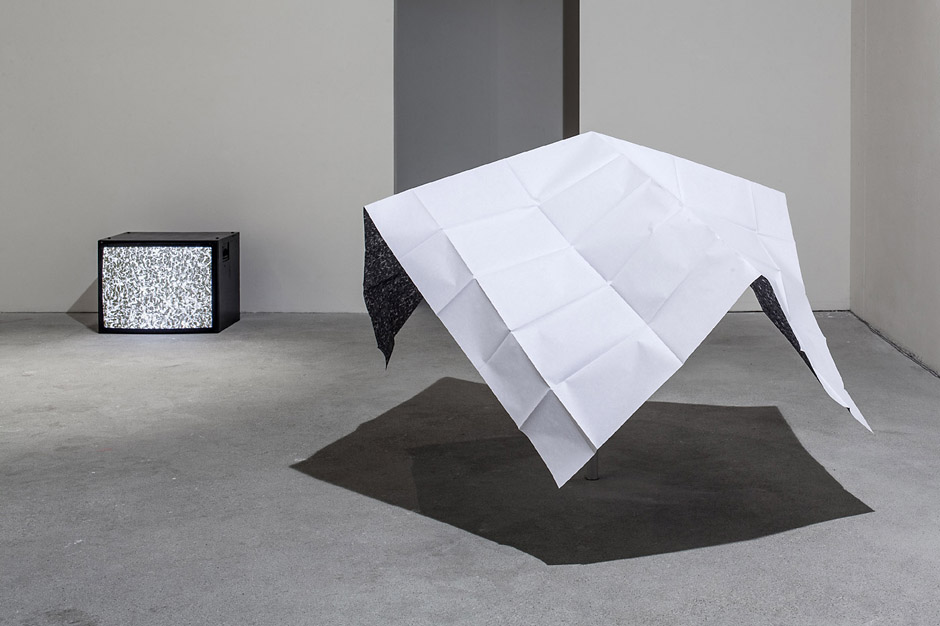 The Reception exhibition is based on an examination of equilibrium and balancing. Tables and a levitating map stand on uncertain foundations; spirit levels are tilted by stacks of paper in file folders. The marble pattern from the file folders appears throughout the exhibition: folders, map, flag and video. This motif is the link between documentation, text and something (marble) associated with building and construction.

The installation is structured in two parts. On one side, viewed horizontally (i.e. on a human scale), are tilted round tables, surrounded by spirit levels propped one against another. The tables do not have evident foundations, and they seem to be hovering – one has to bend down and look below the tablecloths to see how they are supported. The tables are tilted at the most extreme angle at which they can still hold a stack of paper; viewed from the side this visually balances the deviation. The objects made of spirit levels are in a way logotypes, symbols similar to lettering. The spirit levels affect one another rather like vectors, and combining them with files in folders means that they are inclined; it is unclear whether the folders are supporting or unbalancing them. Three legs never require support; two or four legs do.

The second part of the exhibition operates on a different scale, and is viewed from above. The installation exploits the similarity between the marble pattern and the visuality of landscape. An object resembling a map is spread over a construction suggesting a tent or umbrella. The marble pattern is printed on the underside of the light-weight offset paper, and although it is not apparent at first sight, the pattern is discernable on the other side. This not entirely visible process is further developed in the video in the background, where the pattern undergoes a subtle deformation. The process is almost undetectable, something like a stream of flowing soil. Most viewers will not notice this, and will think the video is static. (artist’s introduction) 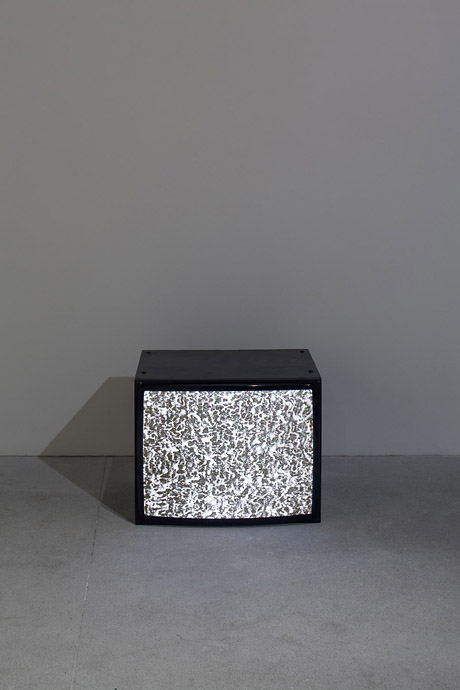 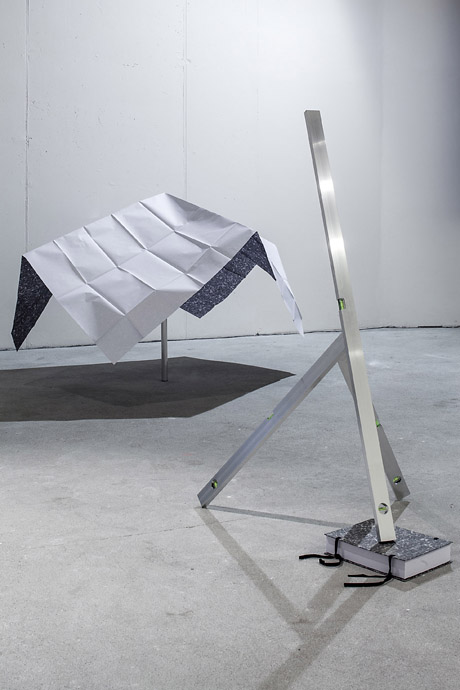 Instead of a text commenting on an exhibition or an individual artwork, why not just a message, a drawing, a picture, a piece of music, a poem, an action, a performance, or some kind of made or manufactured item or group of things? A text for an exhibition, usually written on a computer and then printed on paper, serves a priori as though it were written on a transparent curtain. The truth is that a computer screen is like some kind of neutral milky transparent depth on whose surface symbols tapped out by the fingers appear in a chain of writing construed or generated by the mind. The words of a text are focused on events, forms, manifestos and thoughts from the past, which they can playfully connect with present-day artworks and exhibitions, and these connections are made according to the rules for the genres. There is art theory, the history of art, the sociology of art, aesthetics, the philosophy of art, and there are interviews about art, aesthetics about art, texts friendly and hostile, art manifestos. Unlike us, words can travel in time, go back into the past and tell stories about the past and come back again. If theory is a toolbox, then for a professional theorist the right tool (theory) is just as important as the right glue and pipe diameter is for a plumber when the toilet outflow breaks.

Imagine that someone calls a plumber to fix the toilet outflow, and the plumber turns off the water mains and starts repairing the inflow, or uses plastic pipes to support a plasterboard wall in the bathroom because he thinks the wall might collapse and it’s dangerous for anyone using the bathroom, or he uses plastic pipes to start erecting scaffolding in the bathroom and ideally he extends the scaffolding into the bedroom next to it, which has a window opening onto the courtyard, out of which long pipes now protrude and at the end of one pipe is a downward-facing elbow and around it are coloured sticks and bits of foil and scraps of coloured fabric. This construction sticking out of the window will have to be supported from the courtyard with a batten, or rather an 8x8 beam, and as the beam isn’t long enough we’ll have to extend it somehow and probably double it.

Although a text weighs nothing, it is hard to imagine it without the material support on which it rests, on which it has been printed – this is the paradox of the immateriality of word and text, whose existence is conditional on the existence of a material base. As we know, all possible texts that can be written with the existing symbols (adhering to the rules of grammar or not) can be counted. Every text is therefore a potential text. What is revolutionary and surprising in each text is that it jumps out of this potentiality and is printed on a material surface. Let’s forget about the materiality of the text’s base and imagine that the text is a series of horizontal words in rows, creating a curtain. Imagine the text has been written on the finest transparent paper, so we can see the paper because the text bends in line with the tectonics of the paper interacting with the arrangement of the base it covers. Or imagine the text projected directly onto an object by a data projector mounted in the ceiling. Text is sticky. Once you have read it you cannot get rid of its effect on the object. The words, originally laid down one after another in horizontal rows whose exactness on the computer the author does not need to check and measure with a spirit level, give the impression of good bricklaying work – on the computer and on paper. But when projected onto an object some of them disappear, some are bent, some become more important than their meaning would entail. And after reading they react and are stored according to the rules of the theatre of memory, the law of the motion of particles in liquids and gases; they are stored in maps of mental tectonics and currents. 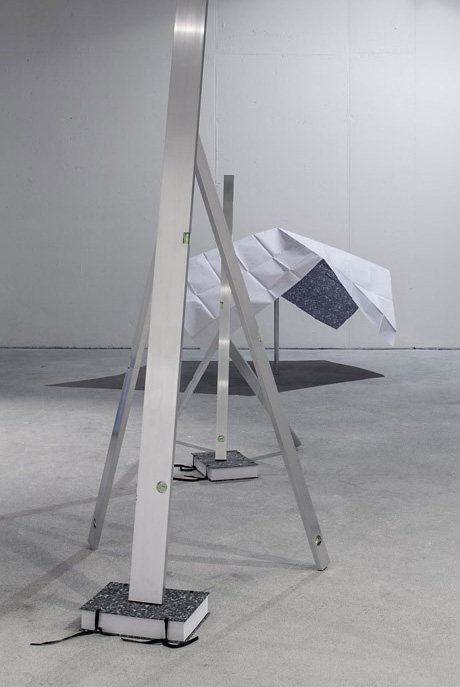 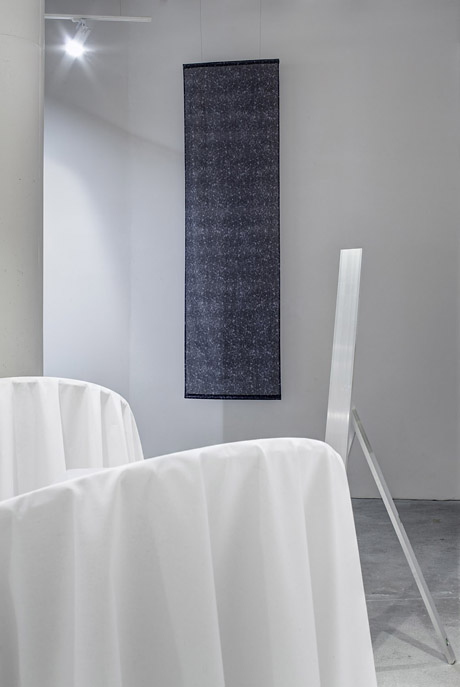